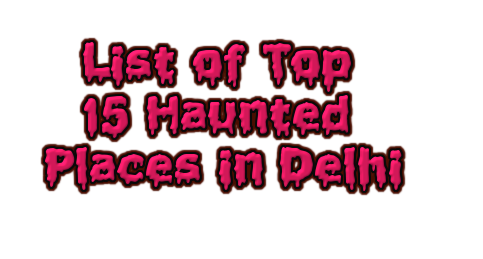 Delhi the city which never sleeps but is it believable that this busy city has places where ghost haunts ? Yes its true as per internet. To find the real truth i visited all these places clicked photos spent night alone. So lets begin with Top Haunted Places in Delhi.

Delhi Cantt is a military residential area and is in surveillance of military as well as police 24×7. The Delhi Cantt haunted road is an exception because it’s a dead end that ends at a military horse stable. is not spooky here. People visit here for selfies to show that they dare to visit this top haunted place of Delhi. The story of Delhi Cantt haunted road says that people see white saree women asking for a lift and if you don’t stop she starts to run with your car or bike even you are at high speed. She never harmed anyone so far but seeing a ghost can be a lifetime experience.

Dwarka sector 9 is too is one of the most Haunted Places in  the  that has almost no traffic and after people avoid this place. Why? Its because this place also has a ghost lady that slaps people coming around the tree or passing this place. This tree is in front of a Temple named Dada Bai Wal Mandir surrounded with an empty ground which is now being developing by Delhi Development Authority as a Public Park.

Sanjay van is located in Qutub institutional area that is near Mehrauli. This is forest developed by DDA. It’s around 850 sq yards wide and has a lot of animals as entry board says. You will not even see a monkey there. Anyways this place becomes spooky at night also board outside warns people not to stay here after sunset and before sunrise. It has a lot of abandoned Mazars & voodoo stuff hanging on trees.

Ghost and Jinns / Djinns are different by nature and Djinns are counted as the most dangerous entity in Muslims. Jamali Kamali mosque is haunted by two jinns that slap people if anyone dares to visit this dead mosque after dark. People hear crying and shouting voices inside the walls of the Jamali Kamali Mosque. This place is under ASI and is get locked before sunset. Daredevil can’t be stopped watch below video.

Yes, friends Malcha Mahal is really scary at nights, and no one is allowed to enter this place as ordered by the local authority. It is the place which was given to Begum Wilayat by the court after a long legal battle with Indian Government. But soon after living here with lots of difficulties She committed suicide and later one by one all her 3 kids died mysteriously. After last kid of Begum Wilayat died, Malcha Mahal was taken over by authorities and sealed.

Bhuli Bhatiyari Ka Mahal is also counted as a top haunted place in Delhi because people see an old lady there and hear her voices in the night. It’s just next to Bagga Link of Karol Bagh, and at the beginning of this road, there is always a PCR. This road goes in woods at the other end. If you once enter this area, then you will have no choice to come back from the same gate of Bhuli Bhatiyari because its surrounded by 10 feet tall Mughal times wall which is not easy to climb and even if you jump you will end up in Ridge jungle which is more dangerous then so-called ghost place.

It’s a 200-year-old cemetery located at the busy road of Kashmiri Gate. Lothian Cemetery is locked for the general public. Its gate has enough space to get from the lower end. This cemetery is known for a headless British officer Sir Nicholas roaming around with is head in his hand. This cemetery is under ASI but looks like abandoned by its structure but in nights it got taken over by ghosts and this place gets taken over by paranormalsand this makes Lothian cemetery one of the top Haunted Places in Delhi.

Feroz Shah Kotla Fort is known for its good Djinns. These Djinns are worshiped here, and they fulfill peoples wishes. But at the same time, they don’t like someone near this place when its dark. It is said that this place has 125 thousand Djinns here. This place is full, and there is no entry ticket on Thursdays, the day when thousands of people of every religion come to pray Djinns and ask them to solve problems.

Agarsen ki Baoli is known for mesmerizing visitors of the night and provoke them to commit suicide by jumping inside the Baoli. Many have drowned here. This Baoli was used to store water in old times and is now dried up. This place has 24×7 security and CCTV cameras for surveillance. No one except some news channel with due permission was entered in Baoli to investigate paranormal activity. Even they spent some hours here they didn’t get an answer to all questions.

Khooni Darwaza is the most neglected haunted place among paranormal lovers. But this is the only place where I get signs of unknown. By the time you are reading this post, I am still working to find answers. I have already visited this place thrice, and each and every time something unusual happens with us. This is the place which was a showcase of heads or rebels in Mughal times. Even last emperor Bahadur Shah Zafar’s both sons were killed here. At the time of Partition, thousands of were people where killed.

According to legend, no person came back after entering this Khooni Nadi. This river sucks people in or provokes them to get inside and then drag them. As its name says Khooni means bloody but no its not read it has regular clean water. Khooni Nadi is also known as Bermuda Triangle of Delhi and is one of the most Haunted Places in Delhi. This area is also full of criminals so never dare to visit this place alone.

This place also has a dead British officer asking for a cigarette from passerby. According to people who saw him said he just ask for lighter to burn his cigarette and never hurt anyone. Mutiny Memorial was built by the British government in 1857 in remembrance of their soldiers died in 1857 revolt. It is guarded by a residential security guard 24×7 and is under ASI.

Chor Minar is located inside a busy residential colony of Hauz Khaz. It was built by Alauddin Khilji. It was also used to hang heads of Mangol Rebels. As it’s located in between a posh colony, there is 24×7 security and eyes of people on you if you dare to visit here at night.

This haunted house can be found in all haunted place list. This house was located in a posh colony of Greater Kailash Delhi. But soon after the murder of its two old residents people started to see their ghost roaming around its windows. People also hear noises coming from this house. If you want to visit this place to show yourself daredevil, it’s too late, as this house is demolished by its new owner and replace with a new state of art bungalow with a security guard. One more thing to note the new owner doesn’t live here for some strange reasons.

Known as Choti Karbala too, this graveyard is now closed for burials. The last person was buried here was in 1985. This graveyard is under Anjuman-e-Haideri. Some internet websites claim it haunted, but upon my visit, I see this place is being used to worship. If you want to visit this Graveyard no need to get afraid.