Kuldhara The Haunted Village of India 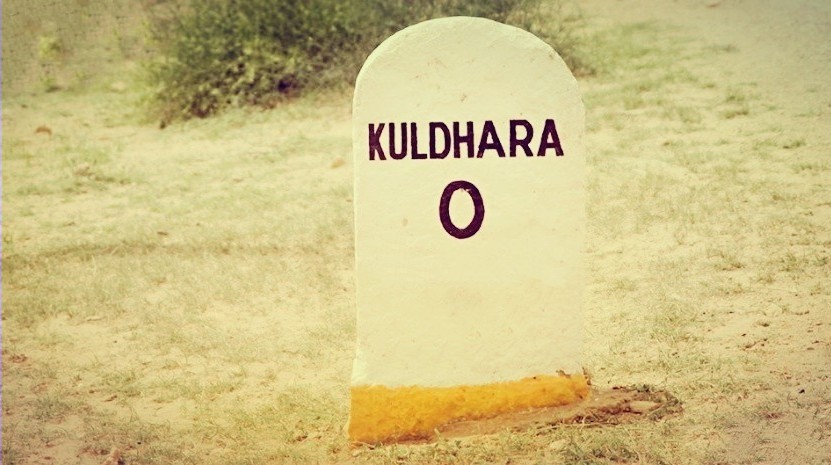 Jaisalmer as you think of this place you will imagine camels, sand and traditional dresses but just 34 km away from the main Jaisalmer city there is a village tagged as the haunted village of India. It’s an abandoned village now declared heritage city of India. Yes, you guessed right its Kuldhara.

This village was established in 1291 by a group of Brahmins from Pali and later they used Paliwal as their surname. Village survived happily for over 600 years till 1825’s mysterious night when all of the sudden each and every single person living in the village got vanished. Where? What’s the story behind all this? Let’s find out.

As per my research, most of the people say they see ghosts walking around the village and abandoned structures. These ghosts are of those missing Paliwal’s who got vanished suddenly. Locals say they are still here to claim this place. Legend says many tried to rehabilitate this village but for mysterious reasons no one was successful. Later Archeological Survey Of India took this village under them and declared Kuldara as a protected monument. There are a few stories of Kuldhara being called a haunted village.

For centuries brahmins of Kuldhara village were living happily but one day Salem Singh Deewan of Jaisalmer had an eye on a beautiful girl of Kuldhara. She was the daughter of sarpanch of the village. Salem Singh offered sarpanch to marry his daughter but he refused the proposal saying hard words. Even after this rejection, Salem Singh didn’t leave any stone unturned but nothing worked.

At last Salem Singh given an ultimatum to villagers that either give that girl to him or he will ruin everyone living in the village. Sarpanch of the village asked Salem Singh to wait for a few days so that they can reconsider his proposal. In the meeting villagers in one voice decided not to let that girl in hands of Salem Singh. So to save the girl villagers hide their gold and important stuff under someplace in the village and ran away without any trace just to save that girl. Before going they cursed this village that no one can ever stay here again.

Mughal Empire of that time came to know that this village is one of the most prosperous villages in this area. They decided to take over the village and snatch everything from villagers. Mughals know that people of Kuldhara were Brahmins and they are vegetarians. Mughals instead of attacking the village started to dump ruins of dead animals around the village and make this place smell like hell. This idea worked and at the end, Villagers of Kuldhara had to leave this village forever to save themselves from Mughal’s torture.

My Visit To Kuldhara Village

I started my journey from Delhi to Kuldhara on my bike. It was October 2018 and I was aware that Kuldhara was a risky bet to stay alone at night to research paranormal. It took around 20 hours to reach Kuldhara that is around 850 km from my place. I was aware that night entry is not allowed here and I need to find the alternate entry. I parked my motorcycle outside the gate and jumped the main gate with my backpack having essentials. It was quite not a single sound of even some animal. I started to walk in. It wasn’t too dark everything was visible in the moonlight. I saw a few ruins and also saw some renovated huts and structures.

After walking for a few mins I saw a night on the road I was walking. I got curious and was frightened same time but couldn’t stop myself to check that thing. As I walk towards that light I heard a voice “Oyeeee”. I turned 360 degrees but couldn’t see anyone. It was one of the scariest few seconds of my life. I thought to move back and run. Before I could make some decision a cop appeared in front of me and asked me how did I get in? I said curiosity took me here and told him that I came from Delhi just to investigate this place at night. He started laughing at me. I asked what happened? He said he is here for night duty and all this is nonsense, there are no ghosts.

He spent months here during his night duty and that is all alone. After talking to him for a few mins I walk back thinking if this guy can live here for nights then why Legend says that no one can live here in nights?

My Conclusion Whether Kuldhara Haunted Or Not

That’s absolutely true that Kuldhara was is an abandoned village and mysteriously every resident of that village got vanished one night. But this all hyped so much that these ruins came to highlights. There is no ghost or paranormal. As i saw a policeman spending night inside doing his duty. I guess local authorities thought to monetize the stories of the haunted village. They made a private partnership with Jindal’s and even made a restaurant inside the village. Its now being developed as a tourist place. So simple just to promote this place as a tourist place these stories are being cooked up by villagers.

How To Reach Kuldhara

The best idea to reach Kuldhara is by road. Kuldhara is 850 km from Delhi NH 11 is the best route to Kuldhara.

By Air – There is a straight flight to Jaisalmer Airport from New Delhi that takes around 90 mins to reach. From the Airport, you can hire a cab.

By Train – My suggestion is to take a train to Jaisalmer railways station and then take cab to Kuldhara.

I used name Salem Singh instead of popular name Salim Singh. Logically a Rajasthani name is Salem not Salim (Muslim name). Sir name used is too Rajasthani “Singh”. Authorities used name Salim on boards but my logic says it could be an error in translating a name written in hindi.