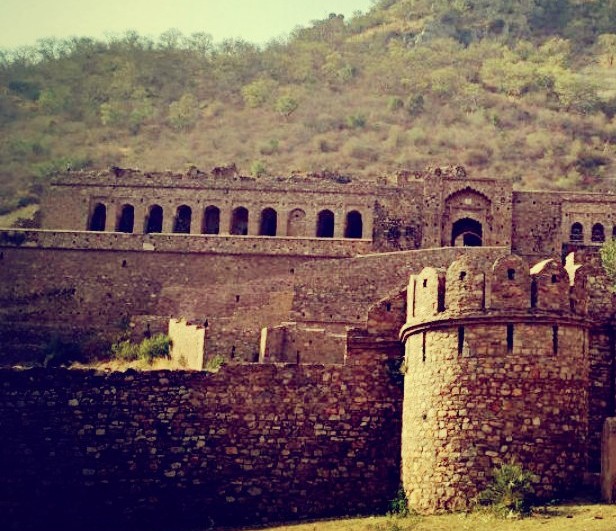 I assume you already know that Bhangarh ka Kila is considered not only as one of the most haunted places in India but the most haunted place of Asia. If you don’t know about Bhangarh fort story, then you can click here to read. Many people claimed that they saw and experienced paranormal even in broad daylight at Bhangarh . But they never showed any evidence of happenings. There are many haunted places in Rajasthan and locals spice up the stories that they heard from old people, and Bhangarh is one of them.

My personal visit to Bhangarh ka Kila can be titled as a pleasant visit to ancient monument, thats it. I didn’t experience any paranormal at this fort. Let talk about ghosts. First, let me ask you a question “Do you believe in ghosts ?” if you answer is in Yes then another question just for you “Have you ever seen ghost by yourself” now let me guess your answer, That is 100% a big “No.” Friends we just believe ghosts exist because of stories cooked around us.

Me and two of my friends planned a night stay at Bhangarh to experience paranormal and thrill of being haunted. We left Delhi early morning in our Ritz car and had lunch midway and reached Bhangarh around 3 PM. We thought that it would look like an isolated place, we will see none there, but when we arrived the fort, we saw 3 tourist buses a lot of cars and bikes outside the Bhangarh Fort. As soon as we entered the fort, we saw Hanuman Mandir. I asked a local about that mandir, he told me that this mandir is just there to suppress the power of paranormal here. It was something scary. We bowed down to Bajrangbali and entered the fort. Fort had a Baoli that was full of water. We saw a few kids were jumping from the first floor into that water. One of my friend got urged to had a dip. But as soon as he jumped in, he got down and didn’t come back. My other friend immediately put things from the pocket and jumped inside to get him. He successfully took him out. My friend told us that someone was pulling his leg and dragging him inside. But we didn’t believe him as he was drunk.

Anyways it was turning to dark, and everyone including birds started to vanish from Bhangarh Fort. We chose a room to stay and started bonfire inside that room ( That room has no roof). We all were at different different corners, and suddenly my drunk friend started shouting “salo masti mat karo.” I asked what happened, he said one of you slapped his back. My heart came out of my mouth I asked both of them to come and sit together. After a few mins he fell down on his face, and he started running towards fort’s gate. We too started running behind him. We thought to ask him in the car about happenings. But he didn’t even stop at car and kept running on the road. My other friend started the car, and we chased him and dragged him into the car and started our journey back to Delhi. I touched him he was hot like a heater, he got fever and asking alcohol. Later after a few days, he told me that he got slapped 2 times on his back. As a conclusion, i don’t believe his story because he was drunk and other two of us didn’t felt any paranormal presence there.

I mean to say that you must have heard a lot of stories but you will find no evidence of ghosts at Bhangarh ka Kila. Night stay is risky due to wild animals, and also it’s a punishable offense to stay at Bhangarh fort after dark. What do you think about my drunk friend’s story do tell me in the comment box.